This one goes out to Jason Schultz, Mr. Disneyland Almanac, and his amazing new book about Disneyland.  Visit him at Disneyland Nomenclature.

This is the 1962 script a Disneyland host or hostess would have memorized in order to conduct paid (and, I presume, VIP) guided tours around the park.  Lots of cool information about extinct or semi-extinct (the Treehouse) attractions.

Why not take this with you on your next visit to the park and treat your friends and family to a good ol' retro Disneyland experience?  Riding crop not required. 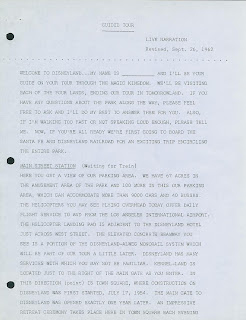 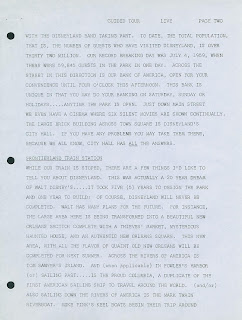 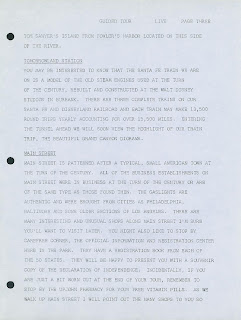 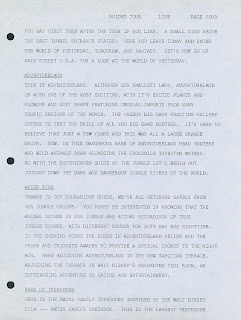 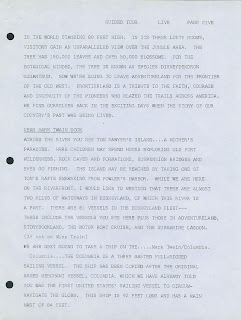 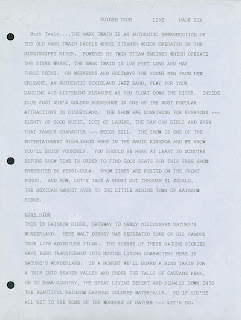 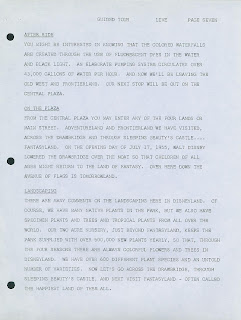 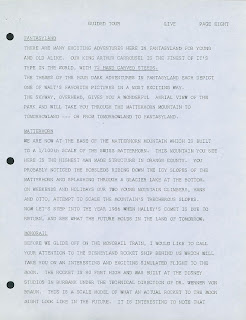 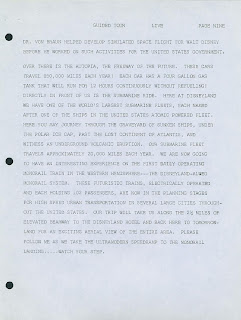 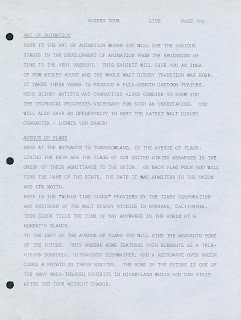 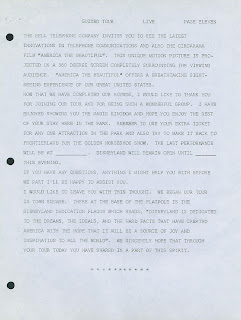 I recently came into possession of a BEAUTIFUL and linen-backed 1958 Disneyland Map.  Yes, the rare "A" version with the Viewliner and no 1959 Tomorrowland additions.  This is a duplicate for me.
I would love to trade this treasure for silk-screened Disneyland attraction posters not yet in my collection, so if there's anyone out there who would be interested in such a deal, please contact me at disjb@aol.com.
In the meantime, enjoy the photo.... 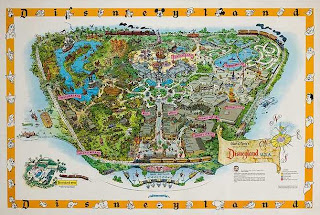 Just found this in some papers from my dad's trip to LA in the mid/late 50's.  The stuff he saved from this trip forms the backbone of my POP and Knott's collections.  I've posted POP stuff from time-to-time; maybe I'll dig into the Knott's next.

At any rate, this is from Marineland and provides a nice overview of the property, including a helpful map and show schedule.  On verso is a map to the location and some general information.

I went to Marineland once or twice as a kid; I don't have vivid memories of it, but I do wish I had trespassed on the property when it was intact but abandonned.

A nice flyer for Marineland fans... 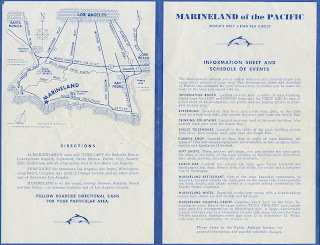 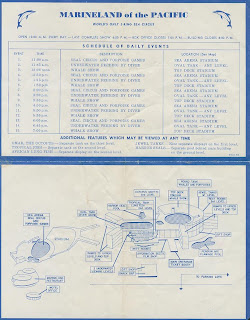 Profiles in History auctioned some vintage silk-screened posters yesterday to BIG bids.  These weren't even A-level posters, but they sold for some A-level prices:

And these prices don't include tax or buyer's premium, which could add as much as 25% to the total. 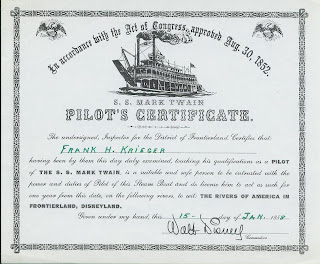 Yes, I know...you've seen these a million times.  Maybe you even have one of your own from when you were a Mark Twain "pilot" as a kid.

Look closely, though, this one is different: the date on the certificate is pre-dated "195__", which makes it exclusive to the park's opening years.  Are there versions that are dated "196__"?  I've never seen one; if you have, please let me know!

Most of these certficates read "19___", which places them later in the park's years or at least after 1959.

Every now and then, the kind readers of this blog leave comments in old posts that ask for appraisals of their Disney or Disneyland items or wonder if I'd be interested in buying or selling this or that.

If you have such a question, feel free to contact me at my email address: disjb@aol.com.  I rarely look back at old posts, so if you're leaving your inquiry there, it's unlikely that I will ever see it.  Just email me....it's a lot easier and more direct.

Thanks again for reading!
Posted by jedblau at 9:21 AM 7 comments:

Sorry for the delay between posts, but you know...life and all.

Here's a cool item that goes with the previously posted 1967 press ticket and program.  This is the invitation for the opening day of the 1967 Tomorrowland that brought us such favorites as the PeopleMover and Adventures Thru Inner Space.

The whole thing was too big for my scanner, so here it is in pieces.  The first shot is the cover, and the second is the whole interior as one piece.  The third and fourth shots are close-ups of the interior, including that BEAUTIFUL conceptual painting that we all know and love.  I wonder if the RETLAW archives has that one...I'll have to ask.  I didn't shoot the text on the far right, but it says something about returning the enclosed RSVP card (which I don't have, alas) to confirm attendance. 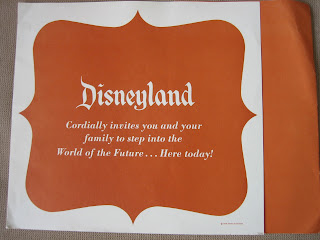 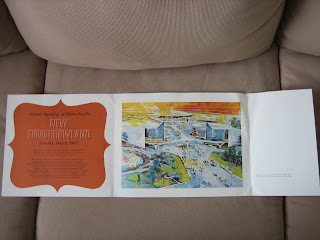 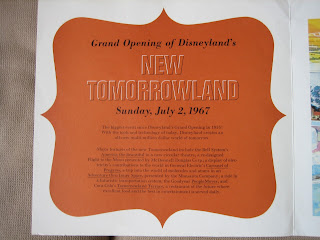 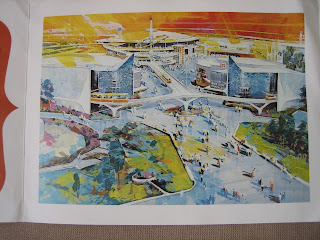 ****UPDATE***
It turns out that I DO have the RSVP card AND the envelope.  You know you're in trouble/old when you don't remember what you own anymore.  Anyway, here's a photo: 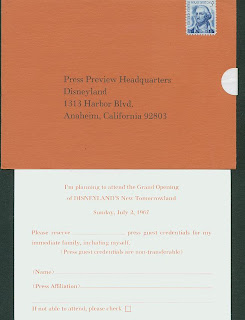 A long time ago, I posted this flyer used to advertise a French puppet show that played for a short time at Disneyland: 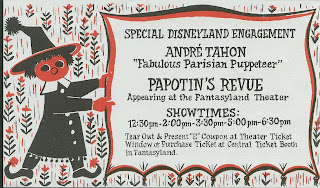 The same show is advertised in the verso of a popular Tiki Room flyer:

﻿
At the time of my first post on this topic, I wondered if the first flyer was created by Disneyland or by Andre Tahon.  Well, Monsieur Tahon maintained a website before his death in 2009, and on it, he posted another flyer for one of his shows.  This pretty much proves that the flyer was created by Tahon rather than Disney.  Here's the other flyer for a French production: 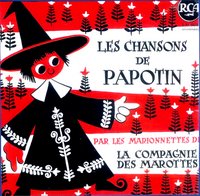 He also published a photo that he claims is from the Disneyland show, and since I have no reason not to believe him, here it is: 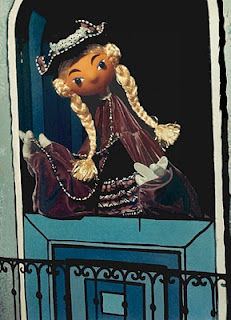 Not much, I realize, but something is better than nothing.

I, along with many Disneyland fans would love to know more about Tahon and his involvement with the early days of Disneyland.  Was he hired by Walt Disney personally?

If you have any light to shed on this most elusive of Disneyland shows, please chime in.