Walt Disney Invites You to the Opening of Disneyland

This letter is a part of my 7/17/55 mini-collection and is the letter that was sent to VIPs to invite them to the opening ceremonies of Disneyland. Although the signature is clearly a printed facsimile (the Hank Porter version?), it's still a cool letter on original Disneyland letterhead. I do not, unfortunately, have the "further information" that is referenced in the letter, but I believe these are the letters that were sent to the VIPs who received gold tickets, since those are printed with a space to write the number of family members who were allowed to accompany the ticket holder to the event.

I have a different version of this letter sent from the Disneyland PR department, which I will post at some point. That one does come with some additional information, but I don't know if it's the same info that went out with this letter. 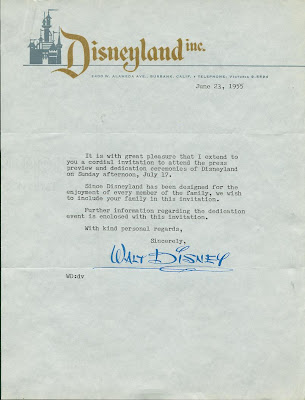 Talk about historical...what a fantastic memento for opening day.

Jiminy Christmas this is SWEET! Historical indeed. I like how the letterhead is still the Burbank address, not 1313 S. Harbor yet!

I got to agree with everyone...what a stunning piece!

I have original blanks of this letterhead. Very cool letter!