A couple of months ago, Chris Merritt cc'd me on an email that he wrote to a woman at WDI about a book that's being prepared to document and celebrate the much beloved attraction posters of Disneyland, WDW, and beyond. In the email, he told her about a piece in my collection that I wrote about here:

It's a piece of original attraction poster art, and Chris thought WDI should include it in their book or at least be aware that it exists. 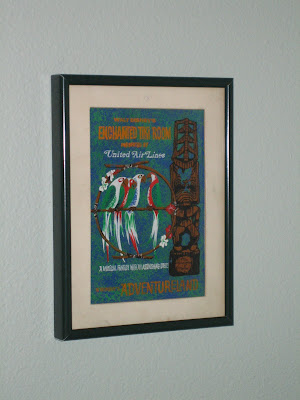 The incredibly nice archivist, Vanessa Hunt, invited me down to the WDI archives/library so that they could view and possibly scan my Tiki Room piece for the book.

I also co-own, with a fellow blogger, a WDI binder from 1962 that was used to catalog all of the styles, orders, and quantities of posters that WDI had produced up to that time. I brought that along just in case. Vanessa and her colleagues were incredibly complimentary about both pieces and scanned them.

Then, the fun began. Vanessa allowed me to view some genuine treasures in the WDI archive. I saw the original Marc Davis sketches and final paintings of these: 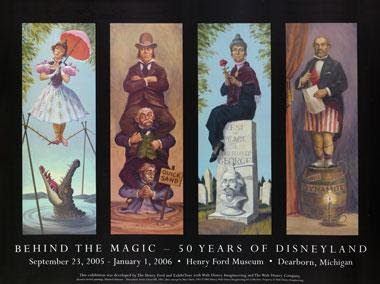 Then, I saw Herb Ryman's original of this: 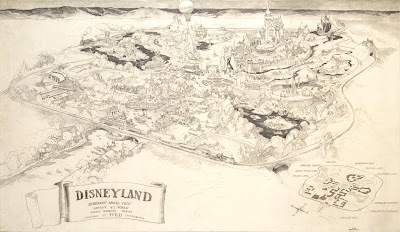 And she took requests!!! I asked to see this Peter Ellenshaw masterpiece, and was allowed to do so: 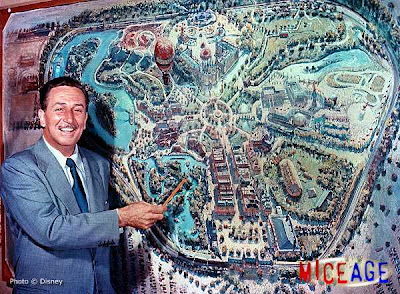 Then, certain to be turned down, I ventured a request to see this incredible painting a very special and rare way: under black light. As the words left my lips, I turned around to see Vanessa actually WARMING UP THE BLACK LIGHTS! To my knowledge, and Vanessa confirmed this, the painting had not been seen in public and under black light...EVER! You can see it under black light in an early Disneyland program, but only in black and white. In color, it is stunning...totally incredible...beyond words. The bright red boilers burning in the Jungle Cruise boats...the tiny lights illuminating the interiors of the passenger trains..the blue moonlight reflected in the Rivers of America. It's a completely different painting in the dark.

Thanks to Daveland, here is a shot of Ellenshaw preparing this masterpiece. 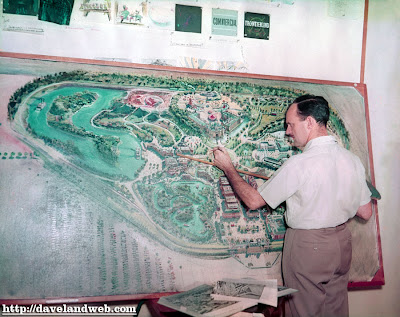 I also saw a trove of Marc Davis originals, Mary Blair concepts for Small World, and more Sam McKim than I can name. And the poster composites! Attraction posters that never came to be were paraded under my nose thanks to the amazing cataloging system Vanessa and her department have available on their servers. One in particular was SO amazing (3 Ways to Dine in Frontierland! WITH THE FRITO KID!) that I offered a straight trade for my Tiki cel. No deal. No surprise.

If WDI uses only 10% of what I saw, the book is going to be INCREDIBLE! So many images and comps that have never seen the light of day. A lot of love and care is going into the book, so it's really something to look forward to in the next 18 months or so.